Fiz sees the body that John has dug up at Underworld and immediately tells him they have to get out of there and the police can deal with it.  Only it’s not so simple since 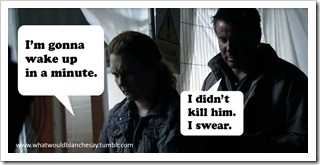 John has a certain attachment to this body, doesn’t he?  John panics and tells her “no police.”  Fiz assumes that John just doesn’t want to be on the police radar after his own past crimes.  She is even scared that the body could be Chesney’s.  However, she soon finds that John indeed has something to do with this body – because it’s the body of Colin Fishwick.  John claims that he never killed Colin, he dropped dead, but he and Charlotte buried him to hide their lies.  Fiz is disgusted that John waved her off to work each morning knowing she’d be stomping on his friend’s  grave all day.  Fiz tries to tell him 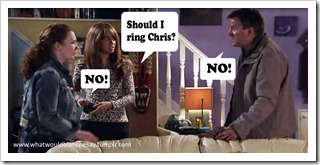 he’s on his own now, but John reminds her that she’s in this too because she took Colin’s mum’s money.  John accuses her of being a loose cannon.  Fiz doesn’t want to listen to anymore, but feels she has no choice.

Maria is freaked out when John and Fiz run back into the house in a panic.  Fiz (again) covers for John in front of Maria and pretends that John botched a job on the work site and that he better fix “it” before Owen finds out. Maria offers to ring Chris, but they both scream “no” in unison to tell her not to.  Fiz asks Maria to take the baby for the night, and she does.  When she leaves, John tells her they’re in this together now.  If he goes down, she goes down with him.  They need to get rid of that body.  He looks in the attic and asks Fiz if the curtains will handle the body weight or if they need to use Chesney’s tent.  Oh, dear.

Becky tries to convince Steve that there is no way that Tracy will want to leave “Hotel Barlow.”  She tries to propose reverse psychology, but Steve’s not bothering.  Becky says that Tracy likes three things: attention, money and men.  They need to starve her of attention, and let her realize how expensive London is.  Sooner or later she’ll realize that the writing is on the wall.  Steve feels like Amy will have a father that didn’t put up a fight and he can’t take that chance – this isn’t a game.

Steve says that as long as Max will be fine that’s all that counts.

Steve basically loses it, and kicks everyone out of the Rovers without even letting them finish their drinks, empties the till, then storms out.  Becky tries to go after him, but Max yells at them for shouting again and she goes to care for him while Steve leaves.  Later, Dev finds Steve gambling away all the money that he has left at the casino.  He gets Steve out of there reminding him that Becky has brought him down all this time and that’s why he’s there throwing his life further away.  When Steve gets back to the street, before he goes back home, he steps into the phone booth and calls social services anonymously about Max Turner staying at the

Rovers and how it’s “not right.”

Graeme is seen doing up his pants with his shirt off – can we all assume something happened here between he and Xin?  Xin tells Graeme he’s a good person and that’s why she loves him – but he doesn’t think so.  He leaves needing some fresh air.  In the Rovers, the party set that got kicked out of Graeme’s and Xin’s complain about all that went down.  Graeme goes to knock on Rita’s door to see Tina.  Rita lets Tina in and they and Dennis all listen to Graeme grovel for Tina’s affections.  Graeme says if he could turn back time, he would.  Tina smiles and takes him back. Back at the flat, Tina sobs over “fake” photos of her and Graeme’s life together as a married couple.

At the cafe, Hayley tells Roy that they’re going camping for ten days, and he has no choice in the matter.  Sylvie has offered to run the cafe, with the “uppity” Anna.

– I like the divide between Becky and Steve – let’s hope it carries on.

– Eileen knocking Norris in the back with her swinging handbag.

– I found the argument between John and Fiz whether or not to use “curtains or Chesney’s tent” to transport Colin’s body quite humorous. 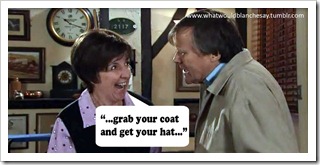 – Funny direction where Steve comes out of Dev’s, and John about to come out of his place, goes back in when he sees someone.  Secrets and lies, secrets and lies!

– Wow, Steve was just cleaning out that till like a mad man!  If only his mother could see this.

– Fiz is finally realized – when it’s so late – just what kind of a psycho John is.

– How could Fiz believe that the body is Chesney’s?  It’s completely decomposed, Ches only went missing a week ago.

– Does it always seem like the Croppers are planning their holidays around terrible events culminating on the street?

– Did Graeme sleep with Xin then directly go over to stay with Tina?!